From beam generation to the workpiece, Laserline can offer industry-appropriate high-power diode lasers for material processing.

With more than 5,000 installations, Laserline’s high-power lasers are among the most successful beam sources for industrial applications in the multi-kilowatt range. Their modular design, high efficiency, and optimum reliability, with low maintenance requirements, are appreciated by our customersaround the globe.

The first conventional solid-state lasers or gas lasers for material processing were huge stationary devices with low efficiency, used for cutting and welding metals. Comparable to ground-breaking changes in the electronics industry in the middle of the last century when the tube was replaced by the transistor, today, there is a similar shiftunderway with industrial laser systems, such as high-performance semi-conductor lasers or diode-based laser systems.

Today, Laserline has achieved performance up to the multi-kilowattrange with its high-power lasers. Furthermore, they keep developing anever more brilliant beam quality.

Diode lasers generate the laser’s light in a semiconductor wafer, which is supplied with energy by an electric current. These laser diodes, called semiconductors, are used in different configurations. There are solutions involving individual laser diodes (single emitters) as well as those which involve many of these laser diodes being mounted on a bar (diode bar). To turn a laser diode into a diode laser, several bars are stacked on top of each other, and several stacks are combined on an optical level. In this way, it is possible to scale up the power from a single laser diode to high-performance systems. Laserline’s high-power diode lasers are designed in line with this principle, and only bars are used.

An important parameter of lasers for industrial use is their efficiency, which describes how much of the supplied energy is converted into light and emitted as a laser beam. While some lasers only convert a few percent of the supplied energy into laser light, diode lasers achieve the best-known value, with up to 50% efficiency (from the socket to the workpiece). This is mainly due to the fact thatalmost 70% of the electric current is converted in a laser diode. This advantage is akey reason for the triumph of the diode laser in industrial production for more than 20 years. 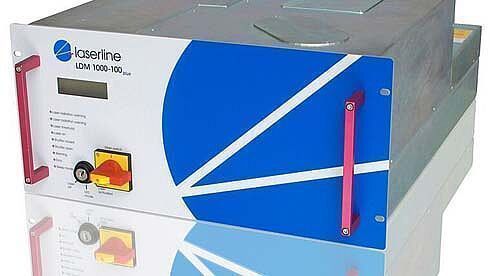 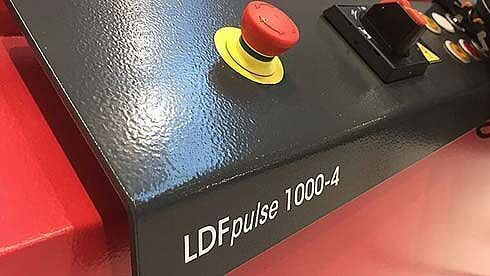 The combination of brilliance and pulse energy. The LDFpulse laser is ideal for fast surface processing.

Laserline’s high power lasers can achieve a standard laser power of up to 25 kW and an efficiency rate of almost 50%. Meanwhile, in the power class of up to 4 kW, it is now possible to purchase converter lasers with a beam quality of up to 4 mm. Additionally, the long-lasting industry lasers are low maintenance, thanks to an innovative diode cooling technology that has been compactly and portably built, and they are even available as a 19" rack mount laser. Furthermore, customized laser designs have been designed, created, and thoroughly tested in our own application laboratory. Additional components, such as processing optics, scanners, beam switches, and monitoring systems, round off Laserline’s growing portfolio. Our operators can participate in training sessions and make use of service/maintenance contracts. In case of malfunctions, a 24/7 service hotline and teleservice with remote diagnosis and remote maintenance are available for the best possible end-to-end service. 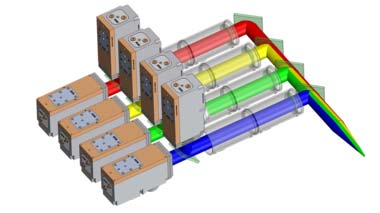 Laserline’s high-powered lasers are characterized by the direct use of diodes as the most efficient form of beam generation. The basic advantage of high-power diode lasers lies in the direct transformation of electricity into light without the indirect route of passing via a pump medium. This means that diode lasers are more compact, more efficient, more mobile and easier to handle than all the other lasers. Diode lasers are a winning option: they are almost maintenance-free and have long lifetimes.

The diode – the heart of beam generation

The laser beam source includes several diode laser stacks, consisting of single diode bars. The number of bars per stack and the total number of stacks determine the output laser power and the required beam quality. With the help of simple, patented technology, the beams of the individual diodes are overlaid into one common laser beam and coupled into a fiber-optic cable. In most cases, the modular design of the laser head makes it possible to further equip the systems with more stacks so as to increase its power subsequently.

High-power lasers that are verging on zero-maintenance

Reliability and process efficiency are key requirements for tools used in industrial production. Fail-safe continuous operation in a multiple-shift operation, including in difficult ambient conditions, is, therefore, the benchmark for our products in terms of quality.

The highest possible process stability and system availability in a triple-shift operation are the requirements in the automobile industry, as fulfilled and proven by the diode lasersin a host of applications for years now. With an almost zero-maintenance operation and a lifetime of much more than 30,000 operating hours at its highest efficiency, the direct diode laser is clearly superior to other laser beam sources. As a comparison: with lamp-pumped Nd:YAG lasers, the lamps need to be changed about every 1,000 operation hours, which always entails downtime and service costs.

Space requirements in production have become an important criterion for planning production lines. As a result, an added plus for LDF diode lasers compared to other lasers of the same performance class is the small amount of space they require – less than 1m² floor space. The compactness and robustness of the diode laser and high-power laser optics even allow for mobile use, if and when necessary, enabling wholly new service and backup strategies.It can be replaced fairly easily and quickly in the event of maintenance work or in the case of malfunctions. This means that maintenance or repair can take place separately from the production line, and, by extension, without production downtimes. It takes less than half an hour to exchange and the laser does not need to undergo new setup or programming. Service calls from customers or Laserline technicians regarding high power diode lasers are, as a result, significantly more flexible.

This philosophy has given rise to lasers that, today, offer up to 25 kW power as standard and can even reach an unusually high efficiency of almost 50 percent. Meanwhile, converter lasers with high beam powers of up to 4 mm mrad are available in the power class of up to 4 kW. Laserline’s diode lasers are long-lasting, low-maintenance, and compactly built for mobile use thanks to their innovative diode cooling technology, and they are even available as a 19" rack mount laser. Furthermore, customized laser designs are designed, created and thoroughly tested in our own application laboratory. Additional components such as processing optics, scanners, beam switches, and monitoring systems round off Laserline’s growing portfolio. Users are offered training, as well as service and maintenance agreements. In case of malfunctions, a 24/7 service hotline and teleservice with remote diagnosis and remote maintenance are available. 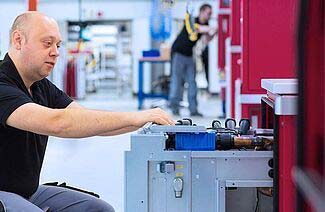 Typical fields of use for Laserline’s diode lasers includetraditional industrial applications in material processing, such as welding, brazing, hardening, softening, and creating or repairing coatings. Additionally, Laserline’s diode lasers have become established within plastic welding and in newer manufacturing processes, such as additive manufacturing (metal 3D printing) or the welding of fiber composites. Users primarily come from the automotive industry, or the engineering, toolmaking and mold-making industries. Many companies in the aerospace industry and heavy industrycount on Laserline today, too.