In our series “Diode lasers and their applications”, we offer a regular insight into the most important applications based on diode lasers. And one field of application, in particular, should not be forgotten: copper welding.

But why is this special application so important? Copper is one of the most important raw materials for electrical signal transmission and thus a key component of many modern technologies. In battery cells of mobile devices, in induction coils or in accumulators of electric cars, copper segments can today be found everywhere. Often the components are exposed to a high current, high operating temperatures and strong vibrations. This significantly affects the production process: When components are made of several parts, the joining seams must be highly solid and must not create additional resistances in the signal flow to prevent an increased temperature in the component. As brazed joints often lack the required head resistance, weld seams created by lasers are the best option here.

However, not every diode laser is the same, nor is every piece of copper the same. This sounds trivial at first, but it is, however, critically important. Why? Because a closer look at the copper components quickly makes the wide spectrum of these components clear: wafer-thin wires are used, as are sheets with thicknesses of several millimeters. This affectsthe kind of welding tool that has to be used. When thin foils have to be joined, low-impact depths and moderate-energy inputs are essential. High intensities would separate the copper foil immediately, but since you need high intensities to fuse copper with the infrared laser, this results in a dilemma. As a consequence,, the infrared diode laser is not suitable for processing filigree copper components; rather, the ideal situation would be to weld with blue diode lasers, as with Laserline’s LDMblue, the world’s first industrial blue laser in the multi-kilowatt range. The reason? Wavelengths in the blue spectrum can be absorbed outstandingly well by copper. With 450 nm, the new LDMblue enables an absorption rate of far above 50 percent to be reached, and in the context of the laser welding of thin non-ferrous metals, this is a quantum leap. A direct comparison with this industry’s typical infrared lasers makes this strikingly clear: an absorption rate of merely 5 percent is attained under identical process conditions for copper welding via IR radiation. As a result,, infrared-based copper welding is only possible with high laser output powers. Additionally, the process is often unstable, leading to welding mistakes occurring – above all, spatters. The blue diode laser makes these problems are a thing of the past. Thanks to the clearly improved absorption, the LDMblue means that a moderate energy input, and by extension,the controlled heat conduction welding of copper, can be made a reality for the first time. Low impact depths and low material vaporizations create homogeneous weld seams without spatters or pore formation.

However, as soon as thicker copper components are to be joined, the blue diode laser reachesits limit:it is only possible to join thick sheets with the deep welding process, a method that is solely possible with very high radiation intensity, due to copper’s good thermal conductivity. Here, the high absorption of the LDMblue does not offer much help: at 1,000 watts, it reaches typical welding penetration depths of 0.6 to 0.7 mm. Higher output powers — LDMblue lasers with up to 2 kW are currently available — improve the welding penetration depth. Since blue diode lasers are more expensive to produce than infrared systems, the process of keyhole welding for copper is currently confronted with the question of economic efficiency. It would be much cheaper to use a traditional infrared laser for this application, but the process disadvantages that have already been mentioned (instability and welding defects)represent hurdles to an efficient welding process here, as well.

As a consequence,, Laserline is developing alternative approaches. This has resulted in a completely new hybrid concept that combines both versions of the laser. A special focusing optic is used to merge the beam of a blue diode laser with the beam of a traditional infrared laser. The blue spot with a diameter of 0.6 – 1 mm is overlaid with a smaller infrared spot, enabling the advantages of both methods to be combined. To fuse the workpiece surface, the high absorption rate of the blue diode laser is used to start with. The infrared laser connected to it now opens the vapor capillary and performs the actual deep welding process. During the whole procedure, the LDMblue stays connected and guarantees a calm and stable molten pool, hence offering an innovative approach with astounding levels of success. In terms of welding penetration depth, seam quality and process calmness, the results are, all told, utterly convincing. At welding penetration depths of up to 3 mm, calm molten pools can be created without visible spatters in the seam area and usually without pores, as well. For the lap welding of two copper sheets,plus at the butt-joint, extraordinarily smooth joining seams are created and impurities are nowhere to be found. 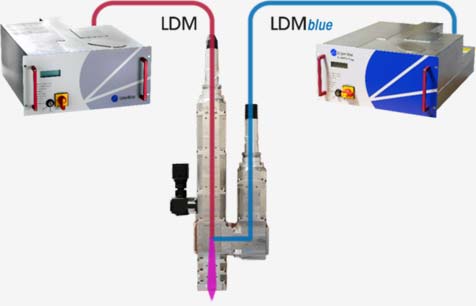 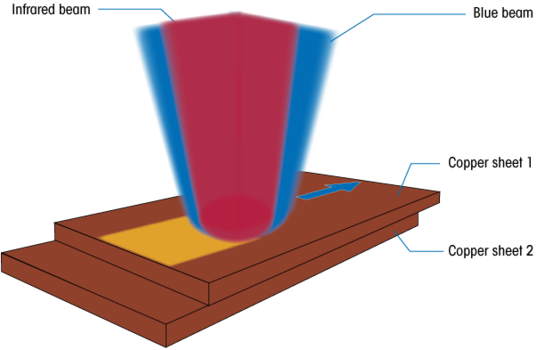 Besides, in terms of energy efficiency the hybrid concept is convincing: While at the blue laser 500 W to 1 kW are mostly sufficient, the infrared laser requires two to five times more output powers. At previous welding processes via the hybrid concept, powers between 1 to 5 kW were thus used. Only infrared-based copper welding is based on far higher intensity beams; here, output powers of 6 kW or more are normal.

Only at welding penetration depths of more than 3 mm does the new approach have to be further optimized. Here, the method currently leads to instable processes, spatter creation and sometimes to the collapse of vapor capillaries. Thus, Laserline carries out field studies with particular focus on spot size, protective gas and feed rate. The goal: making copper deep welding also possible at welding penetration depths of more than 3 mm via the hybrid approach. Beneath the 3 mm border, there are today no reservations anymore as the process is fully stable and suitable for series production. Once more, it shows how much potential the development of diode laser technology has, and there is no end in sight.

Read more about copper welding and the blue diode laser.

Do you have any questions?
Please do not hesitate to contact us!

Actually, what is a diode laser?

Diode lasers and their applications – Part 1: The basics

Do you have questions on our customer-specific laser solutions? Please do not hesitate to contact us!